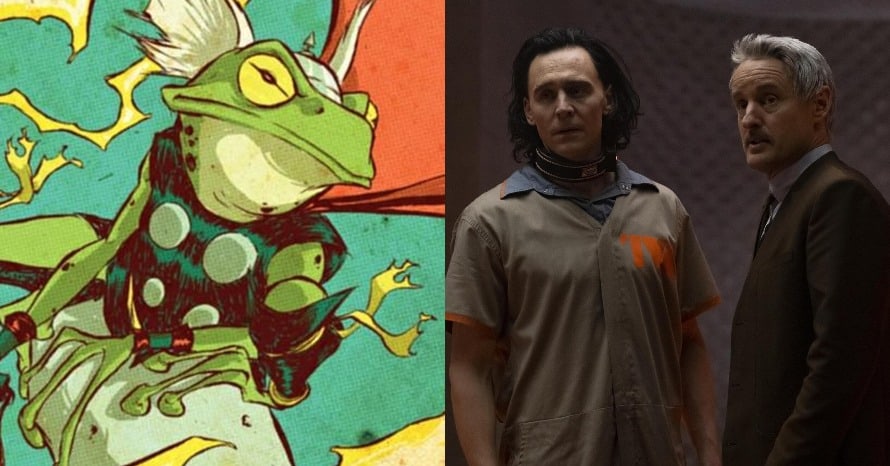 Loki producer Eric Martin revealed that there was a much longer Frog Thor scene that was scrapped.

Perhaps the most exciting thing about Marvel Studios’ Loki is that its whimsical, Bill and Ted-like nature allows it to explore some of Marvel’s most irreverent stories and characters. The fifth episode of Loki introduced audiences to some of the most out-there easter eggs and references, like the much-ridiculed Thanos Copter. The episode also made it a point to introduce Alligator Loki and positing the question if the alligator is really a variant of The God of Mischief or just green. Alligator Loki wasn’t the only animalistic rendition of an MCU character on the episode as audiences got a quick glimpse at Frog Thor.

One of the most memorable storylines in all of Marvel’s comic history is when the mischievous trickster turns Thor into a frog for a prank. Well, in the fifth episode, Frog Thor is seen stuck in a jar, trying to get out. It’s a quick five-second shot but it immediately became one of the episode’s highlights. Eric Martin, one of the writers and producers on Loki, took to Twitter to reveal that Frog Thor was originally supposed to make an appearance in the first episode, where The God of Mischief was screening through his life. Unfortunately, the scene was deleted for the sake of brevity, but who knows? We might just see the scene pop up once again in a featurette.

Comic fans will notice the Frog of Thunder in that jar. We actually shot a scene for the Time Theater in Ep 1 of Loki getting pummeled by Frog Thor, but had to cut it to keep things moving. It’s too bad, because Tom was funny as hell. #LokiMidnightTheater

Are you excited to see Loki conclude next week? Comment below and let us know!

The first five episodes are now streaming on Disney Plus, with new episodes set to be released on Wednesdays. Stay tuned for all of the latest news on Loki and be sure to subscribe to Heroic Hollywood’s YouTube channel for more original video content.