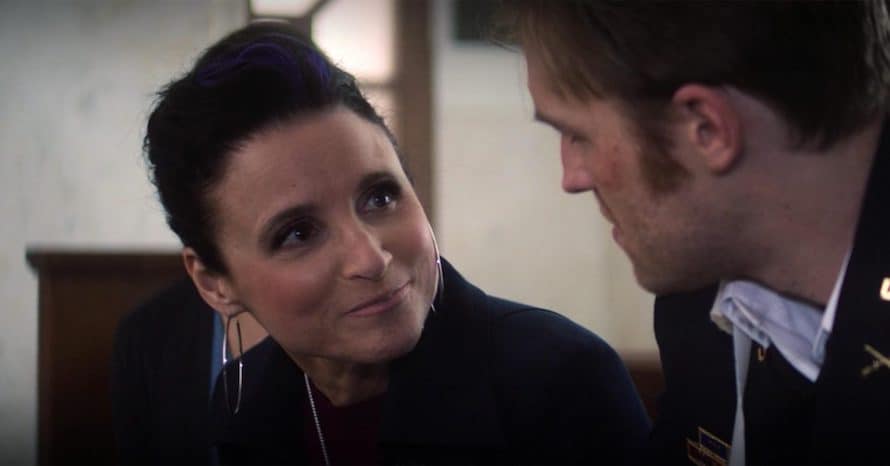 Marvel Studios head Kevin Feige talked about what the future has in store for Julia Louis-Dreyfus’ Valentina Allegra de Fontaine after Black Widow.

Julia Louis-Dreyfus is the latest star who has been added to Marvel Studios’ arsenal. She first appeared in The Falcon and The Winter Soldier as  Valentina Allegra de Fontaine and returned in Black Widow‘s post-credits scene to set the stage for the Hawkeye series.

On the D23 Inside Disney Podcast, Kevin Feige hinted at what’s going on with Julia Louis-Dreyfus’ character as she assembles a team of her own:

“She’s doing something. Yes she is. She seems to be in recruitment modes. Does Yelena already work for her? They seem to have a connection at that point, yes.”

Kevin Feige later expressed his excitement for having Julia Louis-Dreyfus as a member of the Marvel Cinematic Universe moving forward:

“And the future is bright for the MCU because Julia is in it. We are gigantic fans of hers at Marvel. We had a general meeting with her many years ago, Louis D’ Esposito and I really just geeked out that we were even meeting her because she’s such an icon, and we’re very big Seinfeld nerds at Marvel Studios. So the notion of bringing her into the world was always something, if we could find the right thing, was something we wanted to do. And when this role came about and the opportunity to have her in [Black Widow], and [The Falcon and the Winter Soldier], and maybe in some other things coming up.”

What do you think Julia Louis-Dreyfus’ Valentina Allegra de Fontaine is up to? Which Marvel project do you think she will show up in next? Comment below!

Black Widow is out now in theatres and Disney Plus via Premier Access. Stay tuned for all the latest news on Marvel and be sure to subscribe to Heroic Hollywood’s YouTube channel for more original video content.