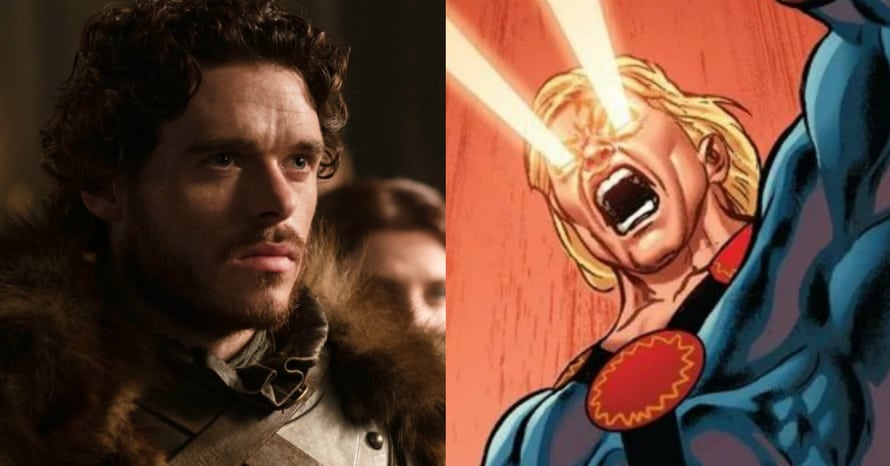 Richard Madden says Eternals is doing something Marvel has not yet done before.

This fall’s Marvel Cinematic Universe slate includes Shang-Chi and the Legend of the Ten Rings, Spider-Man: No Way Home, and Eternals. While the first two films seem to be in line with previous Marvel films, Eternals is a wildcard for the franchise. Directed by Oscar-winning director Chloe Zhao, the film focuses on super-powered beings who have protected Earth for thousands of years. The ensemble film is set to chart humanity’s growth through the eyes of the Eternals, who have been watching Earth’s citizens since their infancy.

It’s definitely a different direction for Marvel, a studio that focuses on action-packed, comedy-driven superhero fare. However, for star Richard Madden, this unique approach seen in the Eternals is something he believes that the studio has never done before. In an interview with GQ, Madden opened up about how the film is more than just “another superhero movie”.

[It’s] above just another superhero movie. It’s about, ‘OK, so how do they interact with the world now, when they’ve done everything?’ What are these people like? And what do they value and care about? What doesn’t affect them? The Marvel Universe keeps changing and elevating and growing and I really think we’re doing something that they’ve not done yet.”

Richard Madden also pointed out how his relationship with Gemma Chan’s Sersi will be “a through-the-ages love story”. In the trailer, we see the duo likely appearing to get married in a traditional Indian wedding. Of course, the Eternals is still a Marvel movie, so it will certainly have its fair share of action sequences. Madden also confirmed to the outlet that his character of Ikaris can shoot lasers from his eyes, making him a deadly foe to any Avenger who dares cross his path.

Are you excited to see Marvel’s Eternals? Comment below and let us know!

Jack Kirby created the title in 1976. In the comics, the Eternals are a fictional evolutionary offshoot of humanity who possess superpowers and longer lifespans than normal humans. Created by the Celestials over a million years ago, the superpowered beings were the result of genetic experiments that led to the creation of two divergent races: The Eternals and The Deviants.

Often defending Earth from their monstrous counterparts, the Eternals became embroiled in a civil war amongst themselves over whether or not they should conquer the other races. One faction was led by Kronos and the other by his warlike brother named Uranos, with Kronos’ side ultimately winning the conflict while Uranos and his followers were exiled.

Eternals is set to hit theaters on November 5, 2021. Stay tuned for the latest news regarding the future of the Marvel Cinematic Universe, and subscribe to our YouTube channel for more content!