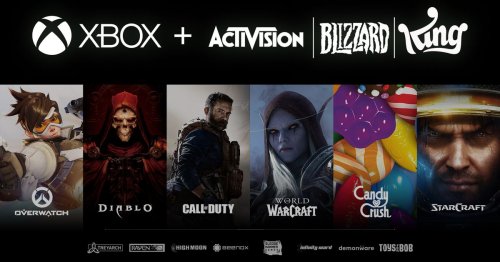 5 issues Microsoft faces in its acquisition of Activision Blizzard

Microsoft will face an uphill battle to rehab Activision Blizzard

Microsoft is acquiring Activision Blizzard, the companies announced on Tuesday, but the deal isn’t exactly done yet. And even when the $68.7 billion deal has been made official, Microsoft will still have plenty of complicated situations to sort out after the dust has settled.

Between Activision Blizzard facing ongoing litigation and accusations of a toxic workplace, the unrest at certain studios, a controversial CEO, and scrutiny from a few government regulatory groups, here are some of the problems that face Microsoft in its Activision Blizzard acquisition.

The Federal Trade Commission and the EU

Mergers of this size have to be approved by regulatory bodies, most prominently the United States’ Federal Trade Commission, the U.S. Security and Exchange Commission, the U.S. Department of Justice, and likely the European Union. While deals like this often aren’t obstructed, both the Federal Trade Commission and the EU have recently grown more hostile to the idea of big-tech acquisitions over fear that further consolidation could lead to harmful monopolies.

One outstanding question is whether Microsoft’s new deal will be treated as a tech acquisition or an entertainment acquisition. While big tech has received scrutiny over the last several years, entertainment deals like Disney’s acquisition of Fox have been met with fewer antitrust concerns. While Microsoft is undoubtedly one of the biggest tech companies in the world, it’s possible the video game subject matter will keep this deal firmly on the entertainment side of the FTC and EU’s radar. However, as Microsoft has positioned this deal as an important play in the metaverse — a decidedly big-tech dominated space — it’s still possible it could raise a few red flags.

If this is deemed a big-tech deal, then it will likely face increased scrutiny. The recently appointed head of the FTC, Lina Khan, is likely to be tougher on big tech than previous heads of the organization, and President Biden issued an Executive Order in July that announced his administration’s intention to protect economic competition, particularly in tech. In fact, just a few hours after Microsoft’s announcement, the FTC announced that it’s starting a process to modernize its merger guidelines for major companies especially in digital spaces — which could have a major effect on this particular deal.

Since July 2021, Activision Blizzard has come under heavy fire from all sides because of accusations of toxic and allegedly criminal behavior in and around its workplace. The instances were brought to light largely because of various official legal complaints filed by U.S. regulatory bodies, including one by California’s Department of Fair Employment and Housing, one by the Securities and Exchange Commission, and one by the U.S. employment commission.

The complaints detail allegations of sexual harassment, workplace bullying, demeaning behavior, and instances of sexism and racism. The complaints eventually led to a walkout by employees, esports sponsors withdrawing support, and several resignations and firings of high-profile employees from several different studios. Activision Blizzard has since settled several of the complaints.

In December, the calls for organization got even louder as many employees at Activision’s Raven Software studio went on a strike (which is still ongoing) with the goal of pressuring the company to rehire several contractors who had suddenly been let go right before the holidays. The same group is also seeking to unionize the studio.

This quest to unionize studios has been ongoing across the video game industry over the last several years, with employees of studios like Paradox Interactive signing collective bargaining agreements and employees of Nexon, a Korean studio, forming a union.

Unionization tends to take a substantial amount of time, meaning that if Activision Blizzard’s employees were to organize on a large scale, it would likely be up to Microsoft to work with and recognize the unions themselves.

Activision Blizzard CEO Bobby Kotick has been a controversial figure in games for years. Criticism of Kotick only grew after the many allegations in the legal complaints surfaced, with many (including Polygon) calling for his resignation. Despite all of these alleged issues cropping up during his time at the head of the company, however, Kotick remains CEO of Activision Blizzard.

The initial news of Microsoft’s acquisition immediately garnered passionate responses that Microsoft must fire Kotick immediately — particularly given that Xbox boss Phil Spencer seemed to condemn Activision Blizzard in the wake of the lawsuits. Of course, business dealings aren’t quite that simple. Major management changes are rarely announced in the middle of an acquisition in part because the acquiring company doesn’t actually have any control over the company they’re attempting to acquire.

According to a report from the Wall Street Journal, Kotick is expected to leave following the completion of the merger, which would likely come in 2023, but don’t expect to hear anything definitive about Kotick’s future until the deal goes through.

The public’s opinion of Blizzard

Aside from its cultural issues, Blizzard’s not in the best shape on the video games side of public perception either. While Blizzard, separate from Activision’s library, has some of the most impressive IP in all of gaming, many of those games aren’t in a great place right now. World of Warcraft is suffering from its worst back-to-back expansions ever and a massive wave of player frustration, while Diablo 4 and Overwatch 2 are both languishing in long and turbulent development processes. The StarCraft IP has remained largely dormant since 2015’s StarCraft 2: Legacy of the Void, and the only games on the near horizon are mobile-only versions of Blizzard’s major franchises.

While this may be the lowest point for Blizzard’s storied universes, this could end up being a good problem for Microsoft. Despite ongoing development on a new Diablo and a sort-of sequel to Overwatch, this is as close as Blizzard has ever come to a square one since its inception, which could give Microsoft and Blizzard the chance get the studio back on track by going back to some of its signature franchises. More importantly, with the addition of Xbox Game Pass, Microsoft can put these new titles — and perhaps even games like World of Warcraft — in front of players for a flat monthly fee.