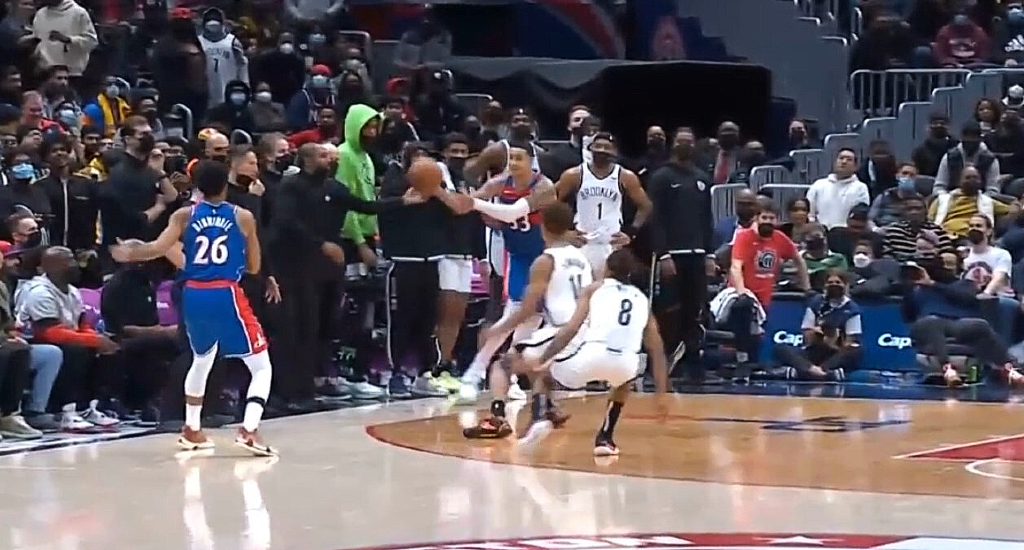 For a lot of Wizards fans, one particularly play will stand out as the reason they lost when they had a possession stolen from them by Nets assistant coach David Vanterpool, who lost his mind and reached out to deflect a pass from Spencer Dinwiddie to Kyle Kuzma, leading to a Kessler Edwards steal with 5:42 to play and the Nets up 109-103, and somehow Brooklyn got away with it.

It is really incredible, especially considering how close one of the referees is to the play and misses Vanterpool stick his hand out onto the court and deflect the ball away from Kuzma, who can’t believe it just happened and that no one else apparently saw it. Edwards retrieves the ball and the Wizards had to retreat on defense despite it, at minimum, needing to be their ball side out and, quite possibly, that earning the Nets bench a technical foul and the Wizards getting a free throw out of it. Kuzma commits a foul to stop play and yell at the ref, understandably furious about what just happened.

While it’s impossible to pin a loss on one play, this happening in the fourth quarter of a one-point loss is truly stunning and Washington fans are rightfully furious. It’ll be interesting to see how the league handles this because one would think a fine has to be on the way for Vanterpool, who immediately knew he’d done something very wrong as he spun away to the bench.

After the game, Wizards acting head coach Joseph Blair was rightfully upset about what transpired and said he’s never seen anything like that happen and not get called.

Joseph Blair on the Brooklyn assistant deflecting a Q4 pass from the sideline: #WizNets | #DCAboveAll pic.twitter.com/4rWHujc3tX