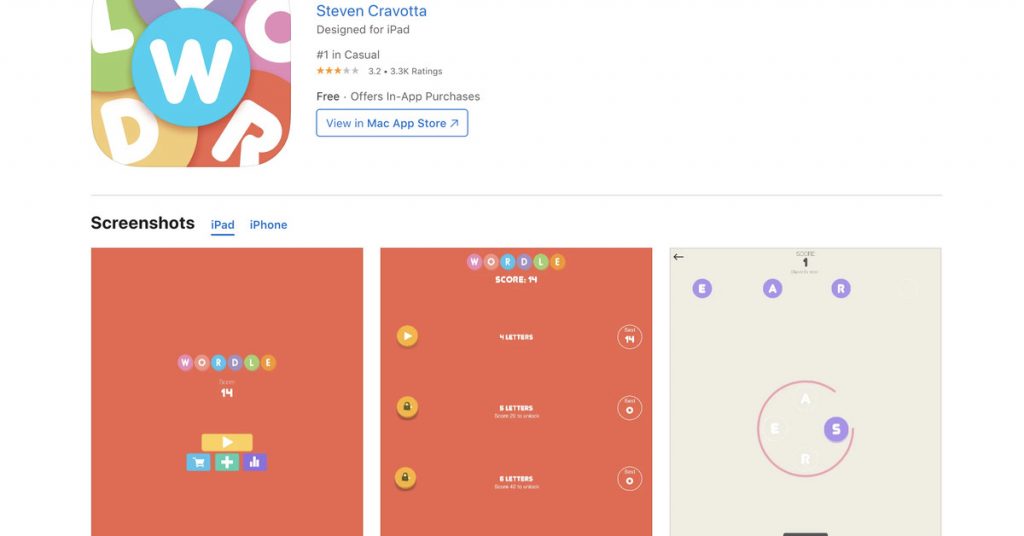 When a five-year-old app called Wordle blew up, its creator donated the proceeds

It’s early in 2022, but one thing is already clear: Wordle has become one of the breakout games of the year. And its success has given a boost to a five-year-old iOS app called Wordle — which is totally unrelated to the popular word game currently taking over the internet — much to the developer’s surprise, IGN reported.

Steven Cravotta created the Wordle mobile App Store game when he was 18, “mostly for fun, to sharpen my coding skillz, and maybe make a quick buck,” he explained in a Twitter thread. The app didn’t take off, unlike his prior creation, an app called Grid, and so he stopped updating it after roughly 100k downloads. As of last week, he says the app has “gotten 200,000 downloads in the past 7 days and it’s not even slowing down yet.”

Here’s how a mobile game I built 5 years ago suddenly got blown up by The New York Times, Wall Street Journal, and Jimmy Fallon.

The viral browser game Wordle, created by Josh Wardle, allows players six attempts at guessing a 5-letter word. It has a simple hook that makes it easy to play and easy to build a daily habit around. The game’s popularity landed it coverage in a number of prominent publications, which almost certainly led to people searching for the game’s name in the App Store, as Cravotta explained in his Twitter thread.

But there isn’t a Wordle app — not from the creator of the browser game, at least. Of course, that hasn’t stopped people from searching for the game in the App Store. Some people have capitalized on this by creating shameless clones that rip off the Wordle concept. (Many of these clones have since disappeared from the iOS App Store.)

Cravotta’s Wordle app is totally different, and it was designed independently of any of this. In light of the app’s popularity, Cravotta reached out to Josh Wardle, and the two chose to donate the proceeds to Boost! West Oakland, a charity founded in 1997 that offers tutoring and mentoring support for students in the area.