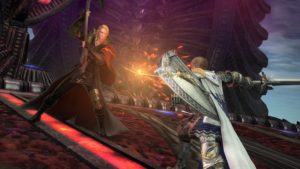 The social sabotage game gets some new scenery

Social sabotage game Dread Hunger is set to leave early access and launch properly on Jan. 26. As the date approaches, developer Dread Hunger Team has showcased a bit more of the game’s next map. The core gameplay around Dread Hunger is that your party has found themselves stranded in the Arctic, besieged by some unknown supernatural forces.

Some players are thralls, malevolent beings wearing the skin of friendly faces. The thralls have to sabotage the expedition by any means necessary, while the crew needs to work together to survive. The Expanse is a wide open space that seems to have lots of visibility. Ice pillars complicate things, and the traitorous thralls will still be able to call on the elements to mask their movements.

One week until we launch, Explorers! ️

For now, here’s a sneak peek at the new map – The Expanse! pic.twitter.com/GkRohLmFAt

Dread Hunger’s Early Access updates have made several gameplay additions already: The Great Hunt added a new class, the Hunter, as well as a new polar bear enemy. The Expanse will likely have some new and specific horrors for players to discover as the game enters it’s 1.0 launch phase on Wednesday.