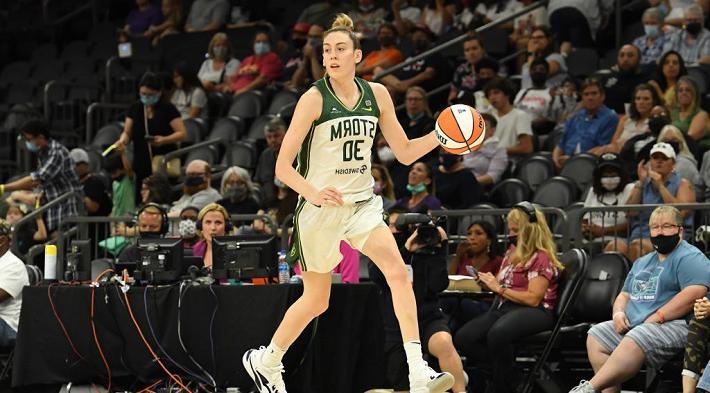 Breanna Stewart is one of the biggest names in a loaded free agent class this offseason, and apparently, the two-time WNBA champion is entertaining the idea of moving back to the east coast. According to Chris Haynes of Yahoo Sports, Stewart, who is from upstate New York and played her college ball at UConn, held a meeting in Los Angeles with the New York Liberty earlier this week.

Haynes reports that the Liberty sent a who’s who of the franchise’s decision-makers to the meeting, including its owners, Joe and Clara Tsai, along with head coach Sandy Brondello.

Stewart is not the only former UConn standout to sit down with the Liberty. It had been reported by Annie Costabile of the Chicago Sun Times that Stefanie Dolson, who was one of Stewart’s teammates with the Huskies, also met with the Liberty, which Haynes confirmed.

The Liberty are coming off of a 12-20 season, and while they earned a postseason berth for the first time since 2017, the team fell in the first round to the eventual league runners-up Phoenix Mercury. The team boasts an intriguing young core with the 1-2 punch of Sabrina Ionescu and reigning WNBA Rookie of the Year Michaela Onyenwere, while Betnijah Laney is coming off of an All-Star campaign and Natasha Howard, a former teammate of Stewart’s with the Storm, joined via trade last year.

Stewart has won just about everything a person can win during a basketball career, and is coming off of a campaign in which she was a first-team All-WNBA and second-team All-Defensive selection. Stewart averaged 20.3 points, 9.6 rebounds, 2.7 assists, 1.7 blocks, and 1.2 steals in 33.4 minutes per game last season.