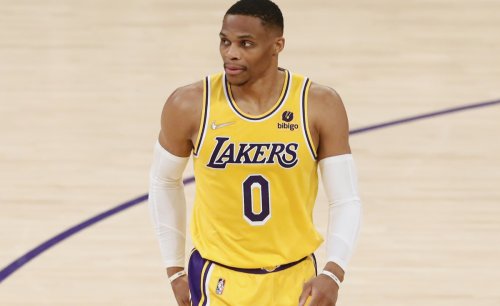 The Rockets Reportedly ‘Would Be Amenable’ To A John Wall For Russell Westbrook Trade, But There’s A Catch

The Russell Westbrook in Los Angeles experiment has not progressed well. Despite some strong stretches of play throughout the year, Westbrook has really struggled to consistently establish an identity and provide a positive impact for the Lakers this season.

That was no more evident than their loss Wednesday to the Indiana Pacers, when Westbrook was on the bench during crunch-time. As the trade deadline inches closer — it’s fewer than three weeks away — speculation continues to loom as to whether Los Angeles can or will deal the former MVP.

According to Marc Stein, the possibility of such a trade transpiring “generally remains a pretty vociferous no.” He does, however, follow up with “I have been advised that I should amend my previous characterization of the Lakers’ finding a Westbrook trade from outright impossible to extremely unlikely.”

A reason for that shift, Stein says, is the Houston Rockets emerging as a suitor “if the conditions are right.” Largely for salary purposes, a Rockets-Lakers deal would center around John Wall and Westbrook, the same two players who swapped teams prior to the 2020-21 season.

Stein says the Rockets are not interested “in having Westbrook play for them again,” but would entertain a reunion if Los Angeles offered draft picks.

“To be clear: This is not a scenario likely to materialize between now and Feb. 10,” Stein writes. “Yet sources say that the Lakers could convince Houston to take Westbrook back for Wall if they attached their 2027 first-round draft pick to the deal. The Lakers could naturally try to offer multiple second-round picks instead, but L.A.’s 2027 first-rounder is the piece rival teams naturally covet.

“Reason being: That 2027 first is clearly the most valuable trade asset that the Lakers currently possess. The Lakers have tried, with no luck yet, to package that pick with Talen Horton-Tucker and Kendrick Nunn in an attempt to acquire Jerami Grant from Detroit.”

Stein says he doesn’t “sense” the Lakers viewing this framework as something they’re pursuing at the moment. But he also notes it could re-emerge in the off-season if Los Angeles’ season doesn’t end fortuitously and its partnership with Westbrook remains suboptimal.

Among other issues is the fact that acquiring Wall, as I see it, doesn’t change this team’s outlook. He struggled last season, isn’t a particularly good off-ball player and the defense has severely declined in recent years. His passing and speed are still weapons, but the Lakers with Wall in place of Westbrook right now probably aren’t in a better position.